5 Syrian Girls on Scholarship to Canada Bring Message of Peace 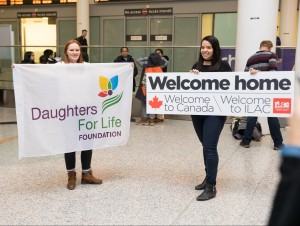 On a cold and freezing night, the International Arrivals Terminal of Toronto Pearson Airport felt particularly warm and joyous. It was after all that long awaited moment when five Syrian girls would arrive in Canada, under a unique educational scholarship led by the Daughters for Life Foundation and the International Language Academy of Canada (ILAC).

Amid loud cheers, bear hugs and the waving of ‘Welcome Home’ banners, supporters, volunteers and the team from Daughters for Life and ILAC greeted Raneem, Ayaat, Asmaa, Aya and Alaa at the airport on Thursday, February 9. 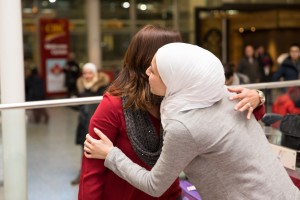 seen with her three young children, bouquets in hand, waiting to encourage the arriving girls, that they were indeed welcome home.  When asked what message such a scholarship program for Syrian girls sent to the world, Elke said,

“I think it is a sign or I hope it is a sign of hope to the world. I hope everybody is listening. It’s a tough time. And ears seem to be closed. Let’s open them and just spread it.” 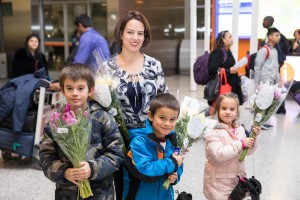 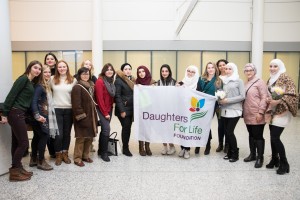 5 Syrian young women are regaining control over their lives 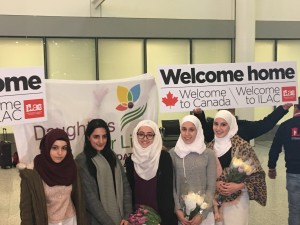 Raneem, Ayaat, Asmaa, Aya and Alaa were students of Business studies, Medicine and Dentistry before the war in Syria uprooted them out of their homeland. Today, these five are receiving a full scholarship to learn English at ILAC’s Toronto Campus. And after the 36-week course, they will apply to Universities and Colleges partnered with the Daughters for Life Foundation to pursue the career of their dreams.

One of the scholars, 22-year old Ayaat Labaad fled Syria in 2012. She has since spent her time teaching science to refugee students on the Lebanese-Syrian border and assisting an NGO in First Aid. Overwhelmed by the show of support on their arrival, Ayaat shared, “This scholarship will achieve my dreams, my father’s dreams. My father’s hopes. And my mom’s. I am so happy.”

The five scholars have been assigned one home-stay family each for the course of their studies at ILAC. Isaura Amaral is one such generous Canadian who is taking in one of the girls in her care.“This is the very least I can do, to offer my help, my family and to ensure she has a wonderful experience,” says Isaura.

In the coming few days as the scholars find their feet in a new country and a new culture, one can be assured that they will shine through. Because in them lies a steely resolve to reshape their future and the future of war-torn Syria.

They will study and build a future for themselves

Respected academics, Members of Parliament and leaders from the business world came together to welcome the girls: on February 10, 2017, at the ILAC Toronto campus, a Welcome Reception was held for the five Syrian Daughters for Life Foundation scholars. 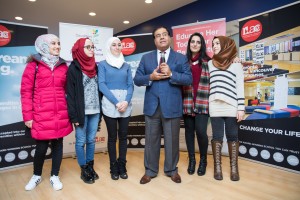 For Dr. Izzeldin Abuelaish, the founder of the Daughters for Life Foundation, to see the girls from Syria that evening was particularly emotional. “To see these beautiful lovely daughters today reminds me of that happy moment when my two daughters and son graduated. In these girls, I have five more daughters today.”

Pointing out that one of the scholars, Aya, shares the same name as one of his daughters who was killed in an Israeli shell attack during the Gaza war in 2009, Dr. Abuelaish proudly shared, “I have another Aya now. These girls from Syria symbolize that we can create life from death. And that’s what today we are doing – to give hope from pain and suffering.”

When asked what this scholarship to learn English in Canada meant to them, 19-year old Raneem Kanaan revealed “we all have suffered from this war. We all have lost.

But we have to do something to make our future bright. I want to say to all the young girls – start now. Make a difference.”

Media attended both events. Below are links to some of the articles written to describe this unique moment for Daughters for Life Foundation: