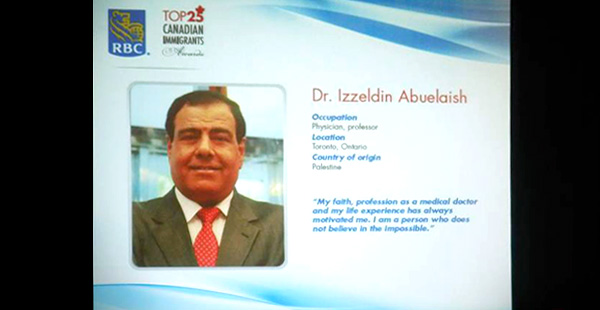 Dr. Abuelaish Selected as one of the 2013 RBC Top 25 Canadian Immigrant Award Winners!

Dr. Izzeldin Abuelaish, Founder and President of the Daughters for Life Foundation, was selected as one of RBC Top 25 Canadian Immigrants for 2013. This is a peoples’ choice award that recognizes people who have come to Canada and have made a positive difference living here.

Over 600 nominations were received in just two months, from which 75 finalists were shortlisted by a panel of judges comprised of past winners and dignitaries. More than 30,000 votes were cast online, the highest number received in the award’s history. 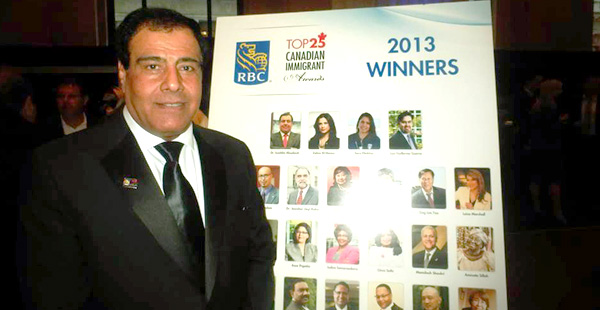 “These winners are role models, not just for new Canadians, but for all Canadians who will be inspired by the valuable contribution these individuals have made to their communities,” said Paul Sy, director, Multicultural Markets, RBC. “These extraordinary individuals are living proof that anyone can make a difference and contribute to the rich fabric of Canadian life.”

Since immigrating to Canada, Dr. Abuelaish has written a book entitled, I Shall Not Hate: A Gaza Doctor’s Journey on the Road to Peace and Human Dignity, which has been translated in 16 languages. He has also established the Daughters for Life Foundation in memory of his daughters, with a mission that strives to empower women and girls of the Middle East through health and education.

Dr. Abuelaish is a nominee for the 2013 Nobel Peace Prize for the third time, and has received many accolades all over the world for his continued work for peace. He was awarded the Order of Ontario, the Mahatma Gandhi Peace Award of Canada and the Uncommon Courage Award from the Center for Ethnic Racial and Religious Understanding in New York.