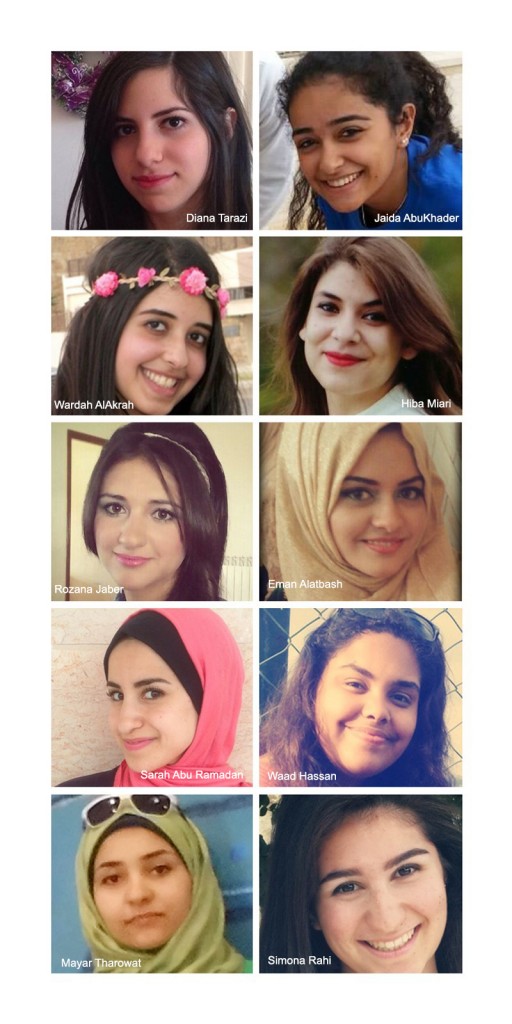 Ten young women students from across the Middle East have been selected by the Toronto-based Daughters for Life Foundation to further their tertiary studies in the United States and Canada. Those chosen were asked to show how they had contributed to improving the lives of other young women and girls in their respective countries and have all achieved success despite having to overcome adversity.

The 2015 intake were picked from more than 100 applicants.  Zein Odeh, a Foundation board member was on the selection committee that interviewed each student.   “The task of shortlisting the young women was really tough,” she said. “I was truly amazed by the high caliber of the candidates; how smart, these dedicated, and empowered young women are, who are determined to change the world for the better”.

“Each of the selected scholars had a story of perseverance,” she said, “and had achieved high academic standards.  Each was determined to make a difference in the future. It was an honour to be part of the selection committee and it truly humbled me as a person. With each interview I was more inspired to better myself and left even more convinced that education is the only way we will see a positive change in our world.”

This year, the Foundation has three new partners: Collège Boréal,  a college of applied arts and technology situated in Sudbury, Ontario; Wilfrid Laurier University in Waterloo, Ontario; and the private Manhattanville College located in Purchase, New York.  It has also renewed its partnership with New College of Florida, where five Foundation “scholars” are already studying.

Hiba Miari, 18, a third-generation Palestinian, from Saida in Lebanon, would like to emulate her father and become a doctor.  She’s heading to Wilfrid Laurier University in Waterloo, Ontario to begin the long road of study with a pre-medicine biology program.   “I have a motto,” says Miari that she has taken from Indian civil rights campaigner Mahatma Gandhi and gives her guidance in life whatever the obstacles.  “Be the change you wish to see in the world.”  Miari, a keen footballer and basketball player, will return to Lebanon to provide healthcare when she starts her career.

The Foundation also stipulates that the young women must return to their home countries to work there.  Egyptian student Mayar Tharowat Ali, 18, will be studying physics at the Wilfrid Laurier University. She shares the same name as one of the three daughters of Daughters for Life founder Dr. Izzeldin Abuelaish, killed in Gaza in 2009.   Ali says this gives her the responsibility of spreading the message of Daughters for Life to other Mayars in the Middle East.

Sarah Abu Ramadan, 23, from Gaza, is looking forward to studying culinary arts at the Collège Boréal.  The fluent French speaker has a first degree in business administration and lists her interests as music, food art and poetry.

Eman Alatbash, 20, also from Gaza, will be studying accounting at Boréal. In her application, she remarked how her childhood had been both happy and sad as the Gaza Strip is continually marred by violence. “All I want is to live in peace surrounded by the beauty of nature, not by the sound of raids and bombardments,” she says.

Wardah AlAkrah, 18, grew up in West Beqaa in Lebanon and admits to always having been attracted to “medical stuff”.  She’s looking forward to the Pre-medical Program at Manhattanville College. Waad Hassan, 18, Palestinian also lives in Lebanon, will be studying English literature at the college and wants to make the Middle East a better place.

Jordanian Jaida Zafer AbuKhader, 18, hopes to become an ambassador for her home country of Jordan.  The native of Amman will be studying International and Area Studies at the New College of Florida.

Palestinian Diana Tarazi, 18, has also grown up in Amman, Jordan. She’ll be majoring in Computer Science. Lebanese Simona Rahi, 18, loves travel and learning about new cultures.  The scholarship at New College of Florida has provided her with an education opportunity, she says, that her family would never have been able to afford.

Rozana Jaber, 18, from Jerusalem, will be majoring in International and Area Studies.  “I carry within me many aspirations for the future,” she says, “where I feel that I am able to bring about a change [within] the society and region. I, with others, will help create a more spirited … environment for the women that I believe carry so much potential.”

The Daughters for Life Foundation’s president is Palestinian Dr. Izzeldin Abuelaish, also known as “the Gaza doctor”, who has worked at a Professor of Global Health at the University of Toronto since 2009. Three of Abuelaish’s daughters – Bessan, Mayar and Aya – were killed by tank shelling in the Israeli incursion into Gaza in early 2009. The Foundation set up in their memory, offers awards, scholarships and fellowship programs to all Middle Eastern young women regardless of their ethnicity or religious affiliation. It believes that empowering girls and young women through quality education, is the key to long-lasting peace in the Middle East and throughout the world.