If you’re going to have a chat with Palestinian student Hiba Adel El Miari, then it might be handy to keep Wikipedia close by. Writers and poets’ names, particularly Arabian or generally Islamic, fall like confetti amid suitable quotes to augment her discussion.  She has a passion for writing and languages; oh she likes painting, plus sciences and literature.  Hiba, of Saida, in Lebanon, is a renaissance woman.

I recognize Mahmoud Darwish, the poet from Palestine, phew, a quick brownie point.  Hiba is proud of her Arabic and Islamic culture, whether it is Iraq or Uzbekistan.  Saida, she tells me, is the smallest town in Lebanon with a castle on the seafront and other beautiful sites. Even though it is small, she says, to quote Persian Muslim spiritual instructor Shams Tabrizi : “Cities are built on spiritual bedrocks and like giant mirrors; they reflect the hearts of their dwellers.” In Saida’s case, it may be small, but it’s big because of the hearts of its citizens, says Hiba.

Hiba is off to Toronto, Canada, to study biology – the first part of years-long studies to become a doctor, like her father.  “I really like the scientific subjects like biology and physics,” she says, “because I love challenges and riddles and biology is about the riddles of the body.”

But her love of the sciences in no way diminishes her passion for poetry and prose, she’s quick to point out for “poems and books remind us that we are human.” They reveal our feelings, she says.

She’s a voracious reader and can finish off a book in a day, mostly Arabic ones for now. She’s a fan of Syrian poet Nizar Qabbani, for his feminist stance, even if he was a bit controversial with his concentration on the female body.  But he never disrespects them, she says, and his message had an influence on how men view women in the Middle East.

Dawish is also particularly important to Hiba because “I have to know what happened to my country.” She’s a third-generation Palestinian living in Lebanon.  “Palestinian girl,” she says, “two words that represent the most oppressed in the Arabic world”. While she’s not entitled to a Lebanese passport, she is grateful to the country that has provided her with an education and plans to serve it as a doctor.

“But there is discrimination when it comes to finding a job, getting a property or a passport,” she says.  Her education will be tough, she says, but then she’s admitted she likes a challenge. Hiba is also keen as a DFL scholar to act as a role model for others. 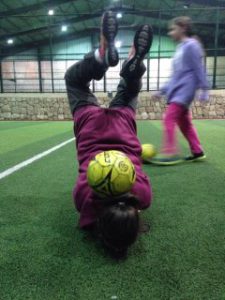 As a young child she played football with her brothers. Her mother felt that soccer was a male pursuit, so encouraged Hiba to play basketball. These days Hiba is a team leader in both sports at school and outside. Her mother seems in the interim to have come around to the idea as she recently donated equipment to the Palestinian Football Academy in Saida.  Football has also become an important outlet for Palestinian girls in the refugee camps in Lebanon,  Hiba says. “It sets them free,” she says. “It allows them to express their emotions.”

Hiba has natural leadership skills and enjoys motivating others. In her application to the Foundation for a scholarship she quotes the Egyptian poet, Hafez Ibrahim, who wrote:

Mother is a school. If you prepared her well, you prepare a decent nation.

Yet, till now, says Hiba, women in the Middle East are deprived of their rights.  “I want to change the way people regard girls.  I’ll be studying all by myself, learning new ideas, an independent way of thinking. I’ll be a role model to other girls. I can explain to other parents what their daughters can do.”

Hiba found out about the Daughters for Life Foundation when she applied to the Unite Lebanon Youth Project.  She’s heading to the Wilfrid Laurier University  in Waterloo, Ontario, Canada.  “I’ll be so proud to be that Arab girl, who’s come from Lebanon,” she smiles.

In her application to the Foundation, Hiba quotes the Indian civil rights campaigner Mahatma Gandhi:  You must be the change you see in the world.