More than 100 female students at 12 Middle Eastern universities were recognized for their outstanding achievement during last month. They received the Daughters for Life Annual Award of Merit – an award of US$500 to US$1000 which helps fund their tuition. The award acknowledges not only the academic capabilities of these third year students, who are graduating in the 2016-17 academic year, but also their courage in overcoming hardship and their contribution to improving the lives of girls and women in the Middle East. 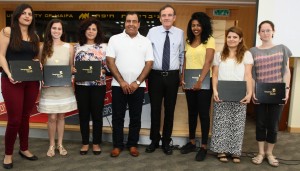 In the first week of July, Dr. Abuelaish and his daughters visited Al Quds Open University in Gaza, Palestine to present fourteen students with the awards.  On July 4, they visited Islamic University, also in Gaza, where Dr. Abuelaish spoke of the need to invest in education. “I mentioned how investing in education frees both minds and people,” Dr. Abuelaish said. “Establishing a free and developed society is done through education and giving women access to that education,” he added. The Award of Merit was presented to twenty two students at the Islamic University. 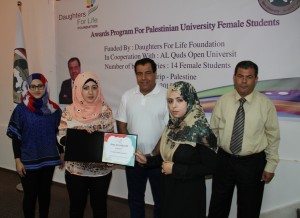 The University of Palestine’s ceremony took place on July 6, where eight students received the award, “It was very touching to listen to the stories of our recipients”, said Shatha Abuelaish. “These young women have very big dreams despite the hardships they are facing. I admired their determination to succeed in spite of their social and financial obstacles,” she added.

On the following day, Katherine Verrier-Fréchette, Representative of Canada to the Palestinian Authority accompanied the Daughters for Life delegation at Al Azhar University ceremony where twenty-five girls were presented with the award. Birzeit University was among the selected academic institutions for the first time in 2015. The ceremony was held on July 9 to award five talented students. 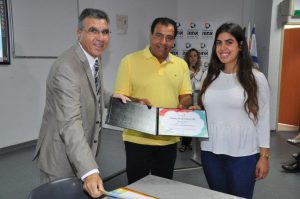 The Abuelaish founding directors also attended ceremonies at the University of Haifa, Achva Academic College and Ben-Gurion University in Israel in the third week of July,. “It is unexpected to give scholarships to the people who hurt your family,” said Rector Prof. Zvi HaCohen on how unusual it was for someone to honor the memory of their children by aiding the people who harmed them. “I learn a lesson from it – possibly, somehow, eventually, two peoples can live in peace together,” he added.

The awards are in memory of Dr. Abuelaish’s late daughters, Bessan, Maya and Aya, who were killed when an Israeli tank shelled their home in January 2009. The awards recognize female students in accredited academic programs, displaying compassion through volunteerism and extra-curricular activities that help improve the lives of others in their community. Many of the recipients face financial difficulties or overcome significant hardships in their home countries. 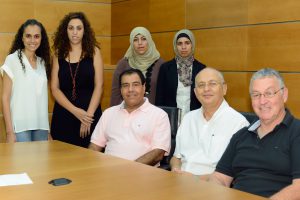 Congratulations to this year’s Daughters for Life Annual Award of Merit recipients. The awards support and celebrate the educational achievements of young women across the Middle East, irrespective of nationality, ethnic background or religious beliefs and nurture the region’s future leaders!

The full list of Annual Award of Merit 2015 recipients