Three New Scholars Welcomed into the Daughters for Life Family

The Daughters for Life Foundation is pleased to announce the recipients of our 2017 Scholarship program that takes talented female students from the Middle East and gives them the chance of a lifetime to study at the world’s best academic institutions. Maria Shehata and Eva Gorgy from Egypt and Darah Al Shalabi from Jordan now join the Daughters for Life family as scholars who will go on to study different disciplines of Science at colleges across Canada and U.S.A.

These bright young girls are not just top ranking students; they are also symbols of a new Middle Eastern woman who is breaking gender stereotypes. These are women who have battled poverty, gender discrimination and inhumanity in their lives and yet continued to pursue education. To the thousands of girls and young women in their communities who are fighting for the right to education, these scholars will serve as role models, inspiring them to believe in themselves and their dreams.

Since 2010, Daughters for Life Foundation has helped nearly 400 young women from the Middle East, more than 40 young women from countries like Syria, Egypt, Palestine, Israel, Morocco, and Jordan have been granted full scholarships to joining one of our 15 partner institutions. These girls have been chosen for their academic excellence, the extent of their socio-economic hardship and a proven record of social work in their communities. 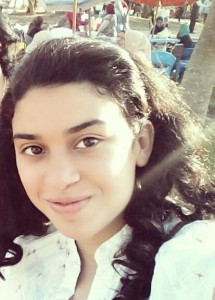 19-year old Maria is a science student from Egypt’s elite STEM school that is reserved for only the best students in the country. To call her an all-rounder would be a more befitting description given that Maria is also a National level track and field athlete.

Since first grade, Maria dedicated herself to athletics to accomplish her dream of participating in the Track and Field National Competition in Egypt. But when it was her time to shine, she found herself swimming against the tide. Maria faced a lot of opposition and adverse opinions from people around her who questioned why a girl should participate in sports, calling her efforts futile. She was asked to choose between her education and winning medals as an athlete.

“Instead of giving up, I pushed myself to fight for what I believed in,” says Maria. I spent a lot of time and effort to find a track and field near my school to go train after classes,” she recalls. Maria not only proved her skeptics wrong but also broke new ground by winning a Bronze Medal at the competition and graduating from her school with a top GPA of 4.0. 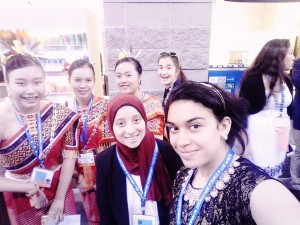 Maria ( on the right at Intel ISEF Competition)

The feisty Maria continues her winning streak. She has been admitted into the New College of Florida’s Marine Biology program that starts in Fall 2017.  She will also be interning at the Mote Marine Laboratory and Aquarium in Florida. Maria says, “So many girls are prevented from doing what they want to do and building their future because of old traditional thoughts. Being a girl doesn’t prevent me from achieving what I want. I am determined to help girls in the Middle East not give up on their dreams,” she declares. 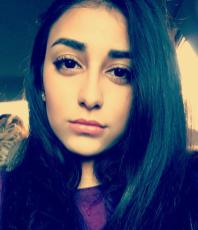 19-year old Darah from Jordan embodies the spirit of the Daughters for Life mission. She is exceptional in her academic ability and is determined to improve the lives of her people. But a university education was a distant dream given her challenging economic circumstances.

Born to a life of hardship, she fought against all odds to complete high school and earn top grades. Sharing her story, Darah reveals, “My father, being a blind talented poet, believes that life is worth living. We grew up carrying this attitude towards life. He made us see the beauty of everything. My mother taught us how to fight for our right to live with dignity and how to push our potential to the utmost limit.”

In her resolve to make something of her life, Darah won Jordan’s prestigious King’s Academy Merit Scholarship to study English and Computer Science. Later she also earned a seat at Jordan’s Jubilee High School for gifted students on a scholarship.

From school theatre where she performed and authored plays to participating in athletics and playing football in the school team, Darah is an ambitious young woman who sees herself as a positive role model.

“I believe the major obstacle girls and women face in my society are due to conventions. Women support their families financially, morally and emotionally. Yet, their role is not acknowledged or recognized. Women are subjected to extreme pressure and restrictions. By achieving success, girls and women might gradually be able to change these conventions,” says Darah. 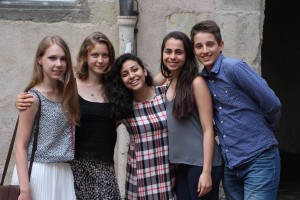 Darah, pictured with peers at a German Language course attended in Germany

Recognizing her immense drive and talent, Canada’s McMaster University has admitted Darah into their Social Sciences program on a full scholarship. Overjoyed at receiving this opportunity, Darah says, “This scholarship will allow me to be a more effective individual, inspire me to have more ideas that I can share with my peers and introduce me to new creative fields where women are excelling. I will be very helpful to girls and women in the Middle East, besides being a good example for female cousins, friends, and neighbors.” 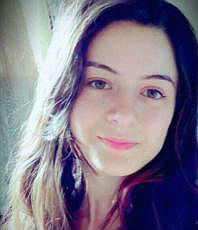 Eva, another science scholar from Egypt, fought prejudice against women’s education not just in society but also at home to reach where she has today. Eva tells us, “At my village, girls were not studying at all. People viewed me as useless. The outlook at home was that education is considered important for a girl only to find her a suitable groom. This fuelled within me a sense of purpose. I had to do my best in studies.”

Eva’s curiosity, love of Science and motivation to be her best self, comes from the struggles her family and she experienced taking care of her brother who is mentally disabled. From a young age, Eva took care of her brother and supported her parents in managing his acute illness themselves, as they couldn’t afford the care he needed.

Her high school remembers her not only for her top grades but also for her compassionate character. Her teachers describe how Eva would help her classmates understand with difficult subjects like Mathematics. In Eva’s words, “I believe the key to women’s success and gender equality is through education. How can a woman raise her children to make the world better when she is not educated?” asks Eva.

Eva at STEM High school graduation party, pictured on the left side: Dr. El-Helaly El Shrbiny, the Minister of Education in Egypt.

York University, which is Canada’s third largest, has accepted the remarkable young Eva into their Biology program for fall 2017. Thrilled at receiving this life-changing opportunity, Eva has already chalked out what she wants to do with her new global education. “I am looking to raise awareness about women’s education. I want to be a living proof for girls and women who don’t have access to good education that they are important. Being born a woman is not a disgrace. It’s their chance to improve generations”, urges Eva.

Apart from these three young women, Daughters for Life will be inviting more scholars in 2017. We have partnerships lined up with Brock University, Ryerson University, Brescia University College and Collège Boréal.

How the 2017 Scholars were Shortlisted

DFL Scholarship applications have always been competitive, and this year was no exception. With over 100 young women interested in the scholarship, by the time applications started arriving in December, it was clear the Foundation was going to have busy weeks of shortlisting. The review process is complicated. The DFL team has spent hours reviewing applications and making the best possible match to each of our academic partner’s criteria. In addition to excellent academic grades, and a good grasp of English, candidates were asked to demonstrate creativity and compassion, and a dedication to improving their communities, both on campus and at home.

One of Daughters for Life’s philosophies is to support its scholars to bring their individual skills to the table and so champions any subject the scholar chooses.  This year applicants demonstrated an interest in subjects such as Business, Film & Media, and Politics but an overwhelming 78% of applications made were for STEM subjects such as Mathematics, Engineering and traditional science subjects like Physics.

The Foundation’s Board of Members joined interview panels and two rounds of interviews later, the selection committee had narrowed the shortlists for each institution.  Discussions continued throughout the process with DFL’s academic partners and this ensured final agreement with scholar selection.

The Daughters for Life Foundation is thrilled for Maria, Darah, and Eva to have made it this far. This was no easy accomplishment and they should certainly be proud. We now look forward to supporting these girls as they journey from the Middle East to Canada and the US this fall. This is an once-in-a-lifetime opportunity and we wish them the very best for the future.