Since the inception of Daughters for Life Foundation (DFL) in 2010, we’ve helped over 400 young women reach their academic potential by providing them scholarships to study at renowned universities and colleges, and granting them financial awards and fellowships to pursue higher education.

All daughters in the Middle East, regardless of their faith, nationality, and ethnicity must be empowered with education. After all, education is a basic human right. By educating a girl, you empower her to be an agent of change and a future leader of her community. We keep this mission alive, year after year, through our annual fundraiser, the Daughters for Life Gala Dinner.

One of the most prolific journalists of our time, award-winning documentarian, author, and host of CBC’s ‘As it Happens’, Carol Off was the master of ceremonies for the 7th Annual Daughters for Life Gala . She kicked off the evening by acknowledging and paying respects to the sacred land of the indigenous communities, on which stood the venue.

She described her admiration for Dr. Abuelaish and invited him to share his vision for peace in the Middle East with the esteemed guests of the evening. 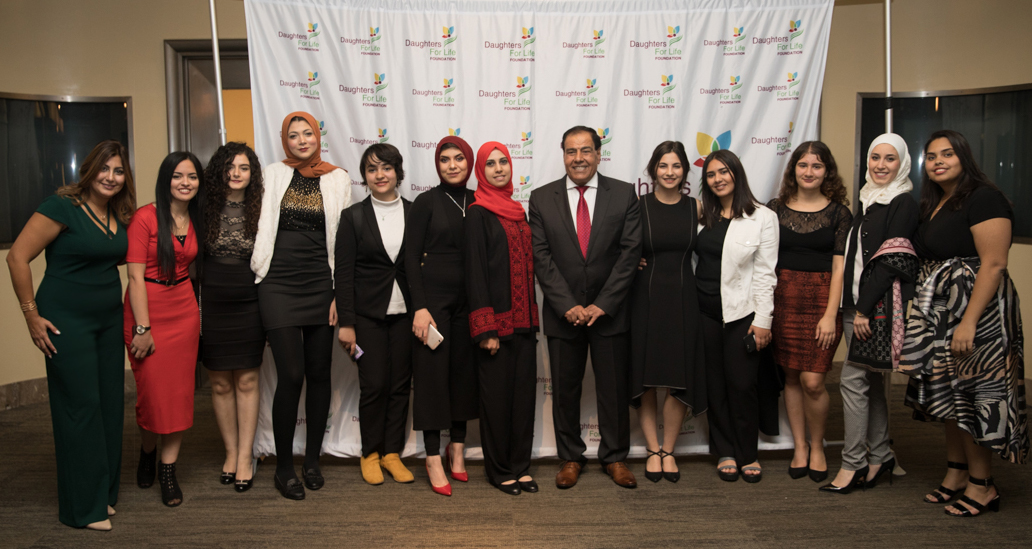 In a powerful speech, Dr. Abuelaish thanked the foundation’s long-standing donors and education partners for their continued support.

“Today, we need today to celebrate and renew our covenant, and instill hope in this world through the mission of Daughters for Life (DFL). We will continue to send the message of hope, love and light,” said Dr. Abuelaish in an impassioned plea to the guests.

Addressing the gala attendees from the dais, Dr. Abuelaish said candidly, “You are the ones who stood with us from day one of the establishment of this foundation. You have participated in planting the seeds. You have worked with us to achieve the success and excellence of our scholars. I remember the day as if it’s today. Daughters for Life Foundation was a dream, and now it has become a reality. This reminds me of my daughter Bessan, who said everything starts

small and then becomes big. Everything starts in one place and goes in different directions,” he remarked.

Dr. Abuelaish also shared the news that the European chapter of Daughters for Life Foundation would soon be launched in the Belgian Parliament.

A select few recipients of the DFL scholarship were given the spotlight at the annual gala evening. This was an opportunity for university partners and other valued philanthropists to see and hear first-hand, the achievements of the scholars they have been supporting.

Daughters for Life scholarship recipient, Waad Hassan had the audience in awe of her eloquence and brilliant personality. Waad, who is pursuing a master’s degree in English Literature at Brock University, began her speech by quoting Ernest Hemingway. “The world breaks everyone and afterward many are strong at the broken places.”

A third-generation Palestinian refugee from Lebanon, Waad recalled her roots, and her experiences in her formative years that cemented her resolve to educate herself.

“At a young age, I realized that others recognized my status as a refugee as a disadvantage, and a weak spot in my backbone that would see me crumble under the worst pressure. Although correct in their assumption and recognition of the difficulty of being a refugee, they failed to acknowledge the strength, will and, determination it takes to be a refugee in this world to survive,” she said.

“The refugee standing here is the daughter of two other refugees who were born and raised in a refugee camp. She started as a 12-year-old girl who thought the only way she could serve her Palestinian refugee community is by volunteering at an NGO, and work with kids in the refugee camps. However, little did I know at that young age, the Daughters for Life foundation will grant me the opportunity to represent this community in the United States of America, in Canada as a successful model of a college student.”

She added, “Thanks to Daughters for Life Foundation, I am one step closer to achieving my dream of being an English professor, to give back the knowledge that I have accumulated over the years, especially back home where education is still in need of advancement.” 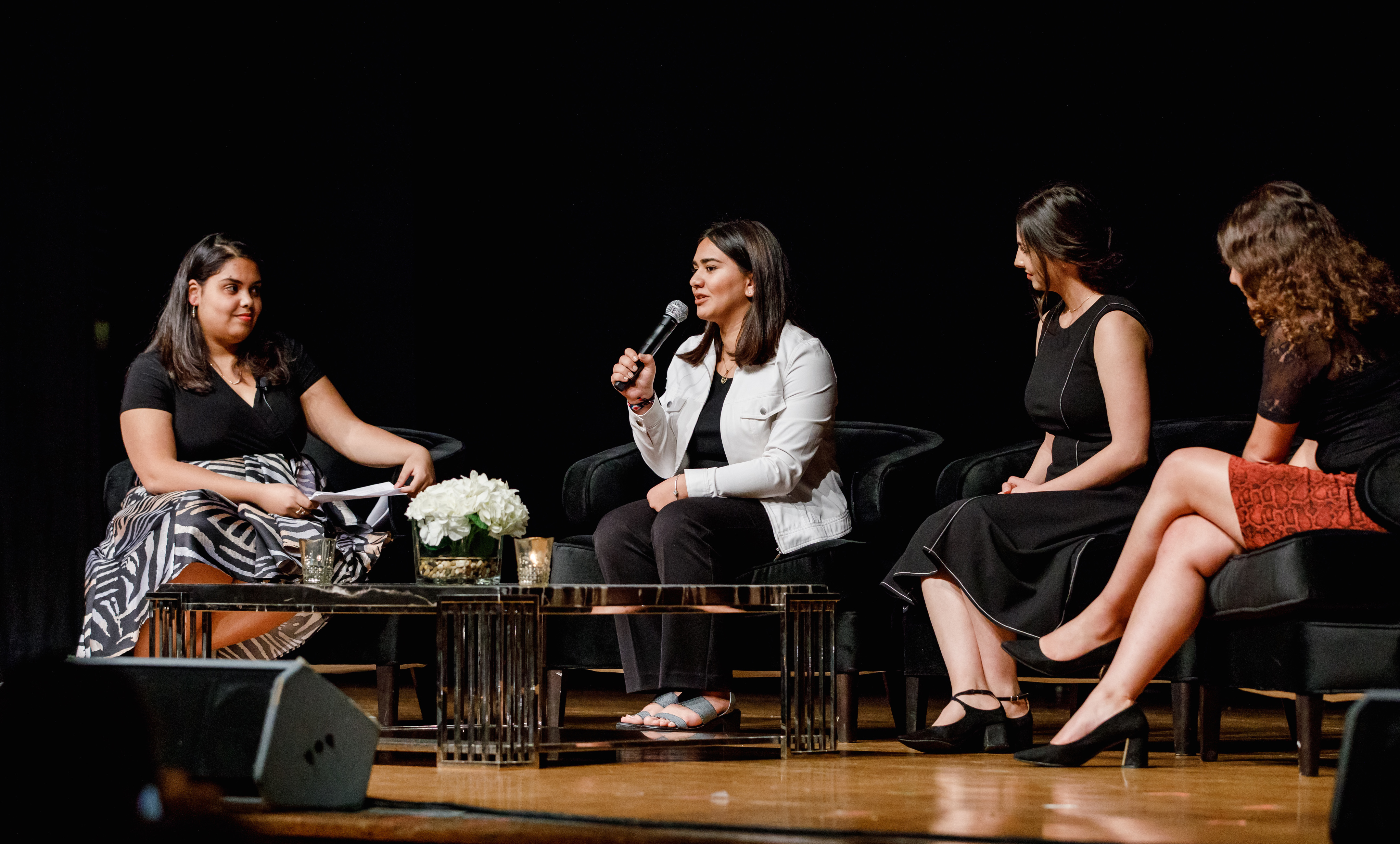 After Waad’s thought-provoking address to the 300-strong gala attendees, she welcomed three other Daughters for Life scholars for a special on-stage panel discussion. Joining her was 18-year-old Rasha Almajali, from Amman, Jordan, who is studying Commerce with special interest in HR at York University. Then there was Liyan Alkawafhah, who is majoring in International Relations at the University of Calgary. Also, on stage was Alaa Hajjar, from Lebanon. She is a senior at Manhattanville College, studying Chemistry.

A hard-working and ambitious student, Rasha has already secured internships at an IVF lab and at a pharmaceutical company. She said her mother’s words are her biggest motivation. “Good education is your weapon in life.”

Rasha said, she felt humbled and was deeply grateful for the opportunity that Daughters for Life Foundation has provided her to pursue university education.

Liyan shared stories about her grass roots work with UNICEF in Jordan, and expressed her commitment towards furthering the mission of the Daughters for Life Foundation.

“Daughters for Life gives us hope. It makes sure that we work to eradicate hatred and judgment that is still instilled within our society. With that very small seedling of belief that was planted in me and the hearts of other scholars, I am sure that we will work together hand-in-hand, to make sure that every single person gets an education, and a good one. Sadly, what’s happening in the Middle East, and with refugees, in specific, is that the education that they’re getting is subpar. The infrastructure of education itself is at fault. It needs fixing, and who better to do that than the Daughters for Life girls.”

It was time for Alaa to give us a glimpse into her backstory before becoming a Daughters for Life Scholar. The Chemistry major has already landed two research opportunities, one as a Research Assistant at New York Medical College, and the other at the Yale Center for Outcomes Research and Evaluation.

“I’ve always loved the sciences. When I got my scholarship from Daughters for Life to study at Manhattanville College, I knew I had to be the best version of myself and excel academically, not only for myself and for my future, but also for girls back home, to emphasize the importance of education and how that empowers them, said Alaa, who hopes to apply to medical school in 2021.

After the engaging conversation with DFL scholars, the gala dinner was treated to an exclusive performance from Forte Band, which featured Nour Khedder on the vocals, Edward Tarzi on the guitar, violinist Amir Khoury and pianist-accordionist, Johnny Bahri. Their soulful music set the tone for the path-breaking stories of courage and kindness that were going to be highlighted as part of the Luminary Awards presentation.

Like Dr. Abuelaish, Mindy Corporon turned her personal tragedy into a mission to end hate. In 2014, Mindy’s father and son were killed by a White supremacist in Kansas, USA. The grieving mother and daughter, Mindy decided to use her pain to end hate crimes. She instituted the Faith Always Wins Foundation to promote dialogue for the betterment of our world through kindness, faith and healing.

Accepting the Courage and Inspiration Luminary Award, Mindy spoke of the importance of community to help raise each other.

“Kindness, opportunity, and hope are much needed today. You wonder how Dr. Abuelaish gets up every single day, and how did he start this foundation? I can tell you, he did it the same way I started our foundation. You do it to keep the spirit alive. I thank you from the bottom of my heart that you are helping him, and all of these young women keep the spirit alive of his daughters. You are making a big difference in our world.”

The Leadership Luminary Award recognizes individuals who have bravely survived events and then distinguished themselves through outstanding service and continued excellence in their field of work.

The 2019 recipient of this award, Dr. James Orbinski is a professor and inaugural Director of York University’s Dahdaleh Institute for Global Health Research. As a medical doctor, a humanitarian practitioner and advocate, a best-selling author, and a leading voice in global health, Dr. Orbinski believes in actively engaging and shaping our world so that it is more just, fair, and humane. Dr. Orbinski has provided medical humanitarian relief in situations of war, famine, epidemic disease, and genocide with Medecins Sans Frontiéres. For this and other work, he was appointed as an officer of the Order of Canada.

Receiving the Leadership Luminary Award, Dr. Orbinski beautifully articulated the core philosophy behind Daughters for Life Foundation. He said education is not just the mastery of knowledge, but about true wisdom, courage, and compassion that is rooted in a felt experience of the other.

“Courage is the desire, the will, and the drive to stand up and participate in shaping our world. Courage means taking the knowledge as we acquire it rationally and apply it systematically with a compassionate lens but also with a desire to create a better world. From my perspective that’s the genesis and vision of this foundation. And that’s why I’m so honored to receive the award and honored to continue to support the foundation.”

The Honourable Dr. Jean Augustine is the first African-Canadian woman to be elected to the House of Commons. She’s devoted to creating opportunities for her community through initiatives such as the Jean Augustine Scholarship that aids single mothers and young entrepreneurs access post-secondary education.

Dr. Augustine began her speech by quoting lyrics from the famous Louis Armstrong song, “What a Wonderful World”. She accepted the award in memory of Dr. Abuelaish’s daughters and niece, and also in memory of all the black women who’ve blazed trails like her.

“Marie-Joseph Angélique, whose history is indelibly scarred in the city of Montreal. Rose Fortune, the first black police woman any place in North America. Mary Ann Shadd, the first black woman newspaper publisher. Harriet Tubman who escorted and walked thousands of miles on the Underground

Railroad, and more recently we acknowledged Viola Desmond who refused to give up her seat in a cinema here in Canada in Nova Scotia. Many worthy women have preceded me on the trail, but only in Canada can a story like mine be realized.”

Dr. Augustine further said, “An empowered young woman can improve her life and have a positive effect on the world around her. We’re committed to building self-esteem and self-worth of young women and girls by positively influencing their outlook in life, broadening their horizons, and helping them to empower themselves. This is what Daughters for Life Foundation is all about, and this is what our involvement with you this evening is about.” 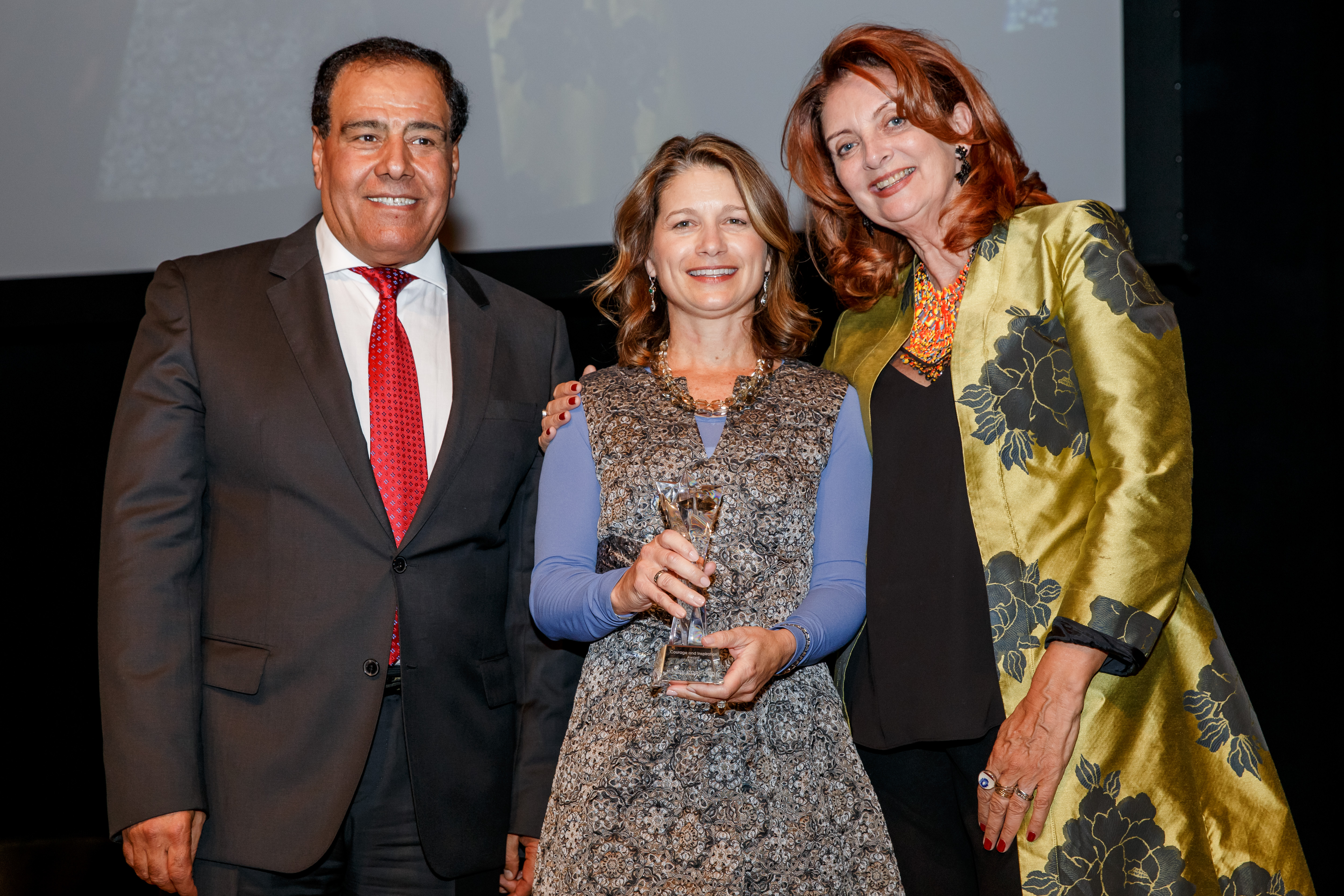 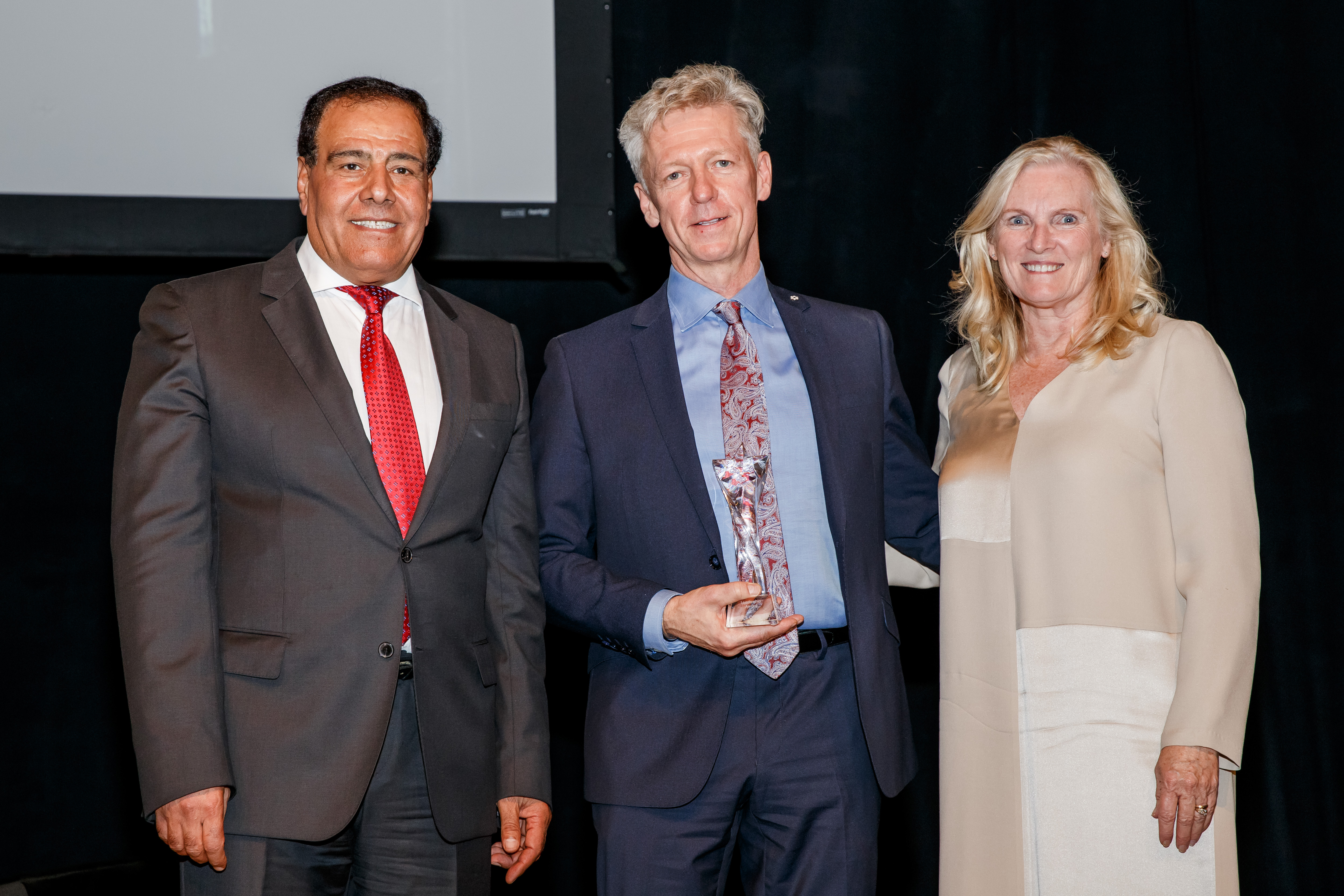 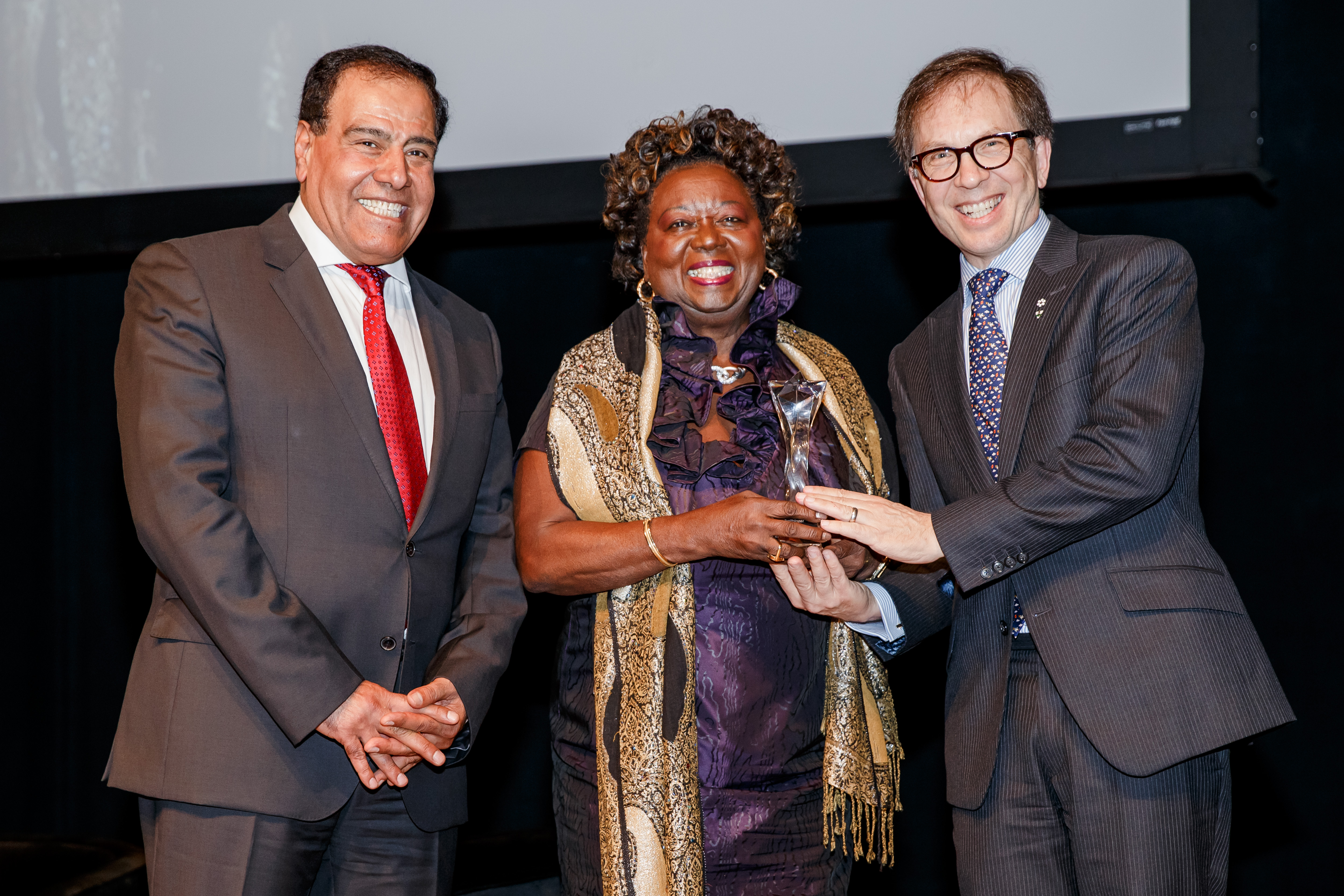 A Heartfelt Thank You to Our Valued Sponsors

Gala Chair and Executive Director of Ryerson DMZ, Abdullah Snobar, closed the evening by thanking our generous sponsors and partners without whom organizing our annual fundraising gala wouldn’t be possible.

On behalf of the foundation, he extended our heartfelt gratitude to our Platinum sponsor – Michael and Amira Dan Family. He also expressed a sincere thank you to the University of Guelph, our Gold sponsor.

He also took a moment to acknowledge our hugely supportive Silver sponsors:

The Gala Chair also gave thanks to our in-kind sponsors who helped us organize an entertaining gala evening: